The forklift was developed in the early 20th century by various companies, including Clark, which made transmissions, and Yale & Towne Manufacturing, which made hoists. Since World War II, the use and development of the forklift truck have greatly expanded worldwide. Forklifts have become an indispensable piece of equipment in manufacturing and warehousing. The impact they have had on the efficiency and safety of these premises cannot be overstated.

Where did it all begin? 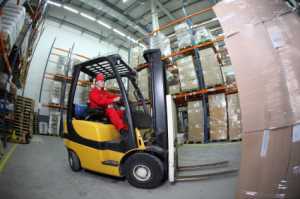 Forklifts as we know them were invented in the 1960s. Initial iterations of the machine have been around since the early 20th century.

Battery powered lift trucks were developed in 1906. But their usage in the First World War led to their successors – lift trucks used for handling heavy loads. The labour shortages during the war meant that these trucks were required in greater numbers. Then once World War Two came around, forklift trucks were used.

Where did it go from there?

It wasn’t until the 1950s that manufacturers started to design trucks that catered for the need to lift and load objects to and from higher places. Trucks were developed with a lift range of 15.2m, which made warehouses and facilities much safer.

How safe are they?

Despite being used for heavy lifting and transporting in busy areas, forklifts are responsible for only 1% of accidents in factories and warehouses. This is partly down to regulating the speed of the forklifts. Their speed is traditionally around 8 mph, but limited to 3 mph in areas containing pedestrians.

The early versions of electric forklifts had a very short battery life. They lasted for around eight hours, or the length of one average working shift. Since then, advancements in technology and also efficiency mean that forklifts can be used for long periods of time before needing to be recharged.

Forklifts are now available with a variety of engine and power sources. There are both internal combustion and electric forklifts available. With the internal combustion engine powered by either gasoline, diesel, propane or more recently, LPG. These engines are engineered to provide a level of performance and efficiency that makes the job of operators easier and safer.

Here at Welfaux Materials Handling, we are proud to offer the finest forklift training services to our customers, utilising over 30 years of experience and a commitment to the best results. If you would like to know more about us or, to arrange a course, please feel free to get in touch with us today.

Looking for a new forklift? We have some great models in stock right now – but act quickly, because when › Read More

As we begin to look towards the summer holidays, now is this time to reassess the safety of your warehouse › Read More